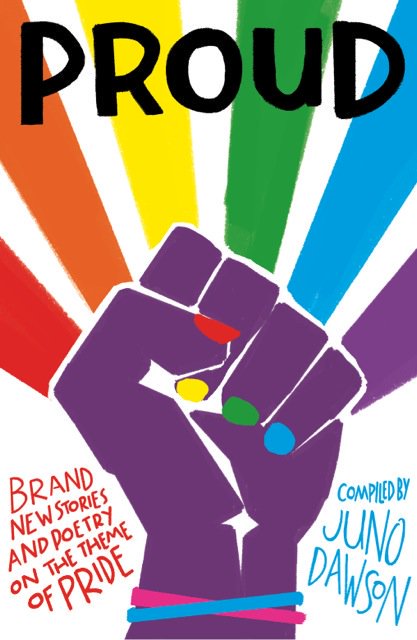 Proud is a book containing a variety of LGBTQ+ themed short stories with a piece of artwork at the end of each story, all put together by Juno Dawson.

Out of the twelve stories within the book, I think my favourites were The Other Team by Michael Lee Robinson—a story about a queer football team from the perspective of one of its star players, Ethan—and The Courage of Dragons by Fox Benwell, which is the story of a group of friends (including two non-binary main characters) who all play Dungeons & Dragons together, and take a quest to the real world to rally against transphobia in their school.

I enjoyed these stories in particular (though the same can be said for every story and poem in this book!) because the characters felt so real. They weren’t just bland background characters who got no character development, and the experiences they went through as members of the LGBTQ+ community are likely to be found relatable by many. The scenes of humour in both stories had me quietly laughing to myself as I turned the pages, and then minutes later I would be frustrated or even upset by what was happening to the characters; all hallmarks of a good book.

The characters felt human, also. As previously mentioned, they weren’t simply ‘trophy characters’ who got no development; these were characters whose experiences impacted them in an entirely human way, and I think this fact will make them appealing to teenage readers who may be going through the same kind of experiences and feelings.

One thing that did disappoint me slightly was the lack of asexual representation within the book. While the content was fantastic and I would happily read it again, I do wish there were some more characters and experiences I could relate to on this front. Regardless, I still thoroughly enjoyed this book.

Overall, I would very highly recommend Proud and all of the stories/artwork within it to teenage readers and above. These stories and poems tell the good and the bad experiences of being within the LGBTQ community; both the good times and the bad, and the artwork paint a vivid picture of the stories they are created for. If I had the chance to read this again, I absolutely would, and if I had to give it a mark out of ten I would absolutely give it top marks!